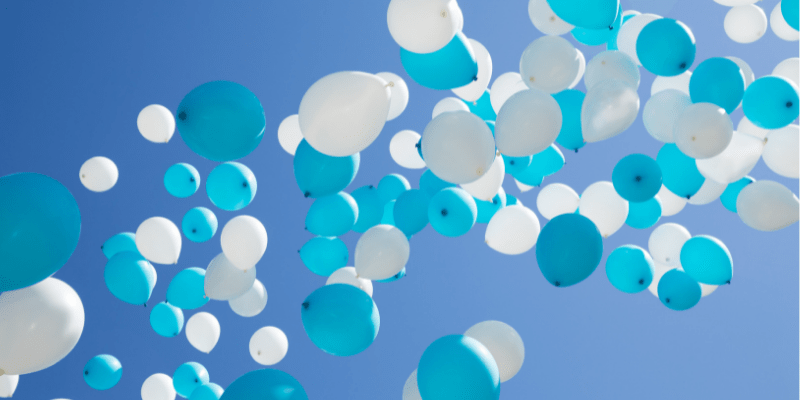 Releasing helium balloons at a funeral: Why it’s illegal in some states

Helium balloons floating majestically into the sky create a beautiful visual at funerals and memorials, but the tribute is causing significant harm to our environment. Releasing helium balloons skyward is now banned in Victoria, and the unlawful act can carry a hefty fine of up to $82,610.

It was already illegal to let go of 20 or more balloons in NSW, whereas releasing helium balloons in other states can also breach local littering laws.

This article explains the rules around helium balloon releases and why the common funeral feature can be deadly to our wildlife.

Is it illegal to release helium balloons in Victoria?

In Victoria, releasing balloons became illegal from July 1, 2021, under the Environment Protection Act (2017).

Under the revised law, any person caught releasing a helium balloon could be fined up to $991; or up to $16,522 for a series of balloon releases. The penalty is even more severe for companies (like funeral homes), which could face fines of up to $82,610 for balloon releasings.

Why is helium balloon-releasing harmful to the environment?

Once helium-filled balloons disappear into the distance they eventually come back down to earth they become litter, causing significant harm to the environment and wildlife, particularly sea animals.

Released balloons can end up hundreds of kilometres from where they were released. Despite misleading labelling claiming that some balloons are biodegradable, they do not degrade and often end up as litter in the ocean.

Balloons are the deadliest form of litter when ingested by seabirds, according to the CSIRO. That is because marine mammals, sea birds and turtles commonly mistake floating balloons for food like jellyfish or squid. When they are ingested, balloons, string and plastic can block the creatures’ airways or become lodged in their intestines. Sadly, this often causes a slow painful death through starvation, according to the Queensland Government.

Other times wildlife can become entangled in the balloons, ribbons and string. This can lead to injury or death through drowning, suffocation, or being unable to avoid predators.

The below video, from the Queensland Government’s department of Environment, Land and Water, explains the environmental impacts of releasing helium balloons:

Is it illegal to release helium balloons in other states?

Environmental protection laws regarding the release of balloons currently differ in each other Australian state and territory, at the time of writing.

In addition, some local councils have banned the release of balloons in their areas. Expect to see more changes to state legislation and environmental bylaws come into effect in future, as balloon release and littering is becoming more of a topic of concern among local governments across Australia.

What are some helium balloon alternatives?

“Balloons can be fun. But they don’t belong outside,” says Zoos Australia. The wildlife organisation encourages people to blow bubbles, not balloons, at their next event.

Instead of releasing balloons at a funeral, memorial, or celebration of life, consider these alternatives:

If you’d like help with some memorial ideas, or to arrange a funeral or memorial service, visit the Bare Memorial webpage here or chat with our dedicated funeral arrangers. Call 1800 202 901 for a prepaid arrangement, or 1800 071 176 for an immediate need arrangement. What do people really want from a funeral director?

Australians have told us what they value most from a funeral director. Find out here. Funeral myths busted! We separate the facts from the fiction when it comes to plannng a funeral. Prepaid funeral plans: Planning ahead vs ‘just waiting until later’

Here’s why a prepaid funeral makes more sense than leaving it to your kids later on.